A day to celebrate 30 years of the Peace Camp

For the first day of the summer holidays it started early. I was even careful in how much I consumed the night before at the end of term night out. It started with a brisk walk down to Cowcaddens underground to meet at Morrisons at Partick for the mini-bus.

There was then a tour of the Campsie countryside, picking up various people in this rural idyll. We finally turned for Helensburgh with a final pick up in Bearsden. Despite the Police raid at our rehearsal and knowing that “they” were watching us, there was no welcoming crowd from the boys (and girls) in blue. 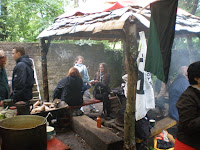 But there was a warm welcome from the folk at the Peace Camp. Never having been there before I was intrigued to find out what it was like inside. You walk in through a small meandering path with caravans with metal chimneys poking out, dotted along each side. What you can see from the road is deceptive as it looks like there is hardly any land there but there is a surprising amount. You then see the main area; opening up with a campfire with wooden benches around it and a roof on posters over the top of all of it.

I love the smell of a wood fire, I always find it soothing and makes me think of life at a simpler level. Life in the camp is at a simpler level. Everyday worries that most people may have such as paying the bills or worrying if the neighbours are having another party on Saturday night don’t matter. Of course many of the worries are bigger e.g. are ‘we’ going to annihilate life as we know it on the planet. I know this might sound strange but it’s a more satisfying (and real) worry than hoping there’s something good on the telly tonight. And they are doing something about it!

Everyone was really friendly, laid back and seemed at peace with the life and themselves. Just beyond the boundaries of the camp that may not be so true. The MoD Plod were keeping their eye on the camp. Just in a break in the woodland a Transit van full of  fluorescent jackets could be seen. It (or they) sat there for a while and then drove off, only to come back (or be replaced) shortly afterwards. Surely being on Peace Camp watch, must be the easy shift. Since 2001 there has been the extra heightened panic on terrorism (which I won’t digress into) but surely only the stupidest terrorist would hand over a bazooka (or whatever) in plain sight. Anyway they saw us eat soup, perform and then eat cake; I hope they felt some satisfaction in that. 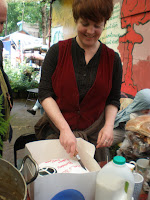 On those three; the soup was great, the performances went down well with the crowd and the cake was fantastic. All of the short plays seemed to strike a cord and the music much appreciated by all those watching; of which there was a variety from a Japanese tourist to retired folk to teenagers. Another part of the audience was a small film crew for an independent web based news site therealnews.com, they didn’t intrude much and were concerned with the camp and not really our show. The performance ended with Happy Birthday being sung by all to the Camp.

After that we headed up to the North Gate of Faslane to protest and hand in a petition against the bomb.

We were a relatively small group and stood on the pavement at the entrance into the base but gave in our petition and posed for Plod when they took our photos. Neil videoed the blonde taking our pictures, don’t know if he’s likely to post that one though. After that most of Plod were very chatty and were happy to pass the time of day with anyone willing to chat with them (as I said before – easy shift). The guy in charge though was a bit up tight; especially when he spotted the cardboard tube used to bring one of the banners in. From across the other side of the entrance he homed in on this dangerous piece of cardboard with its possible road blocking potential (his words) and took it away. He did agree to return it when we were leaving though; because of course even if we were intent on blocking the road (with this piece of cardboard) we wouldn’t do it after we said we were leaving.

We did leave, without blocking the road, and headed back to the camp. Once the youngsters had been taken back for the train from Helensburgh we went back on our mini-tour of the Campsie lowlands before going back to the mini-bus hire place to end what for me had been quite an extraordinary day. It was an exciting end though, trying to beat the clock before the hire place closed at 5pm, watching the clock as the minutes and seconds ticked by towards the deadline. We didn't make it, by about 10 seconds! But the place was closed up and no one was there. They must be revved up and ready to disappear at 16.59 I tell you.
Posted by Biker Neil at 08:06